The week of Puff Daddy’s 24th birthday, the would-be mogul ended up on his first album cover. In late 1993, before Bad Boy Records ever released a single, and No Way Out was a distant dream, Sean Combs appeared on the outer artwork to A Tribe Called Quest’s third album, Midnight Marauders. It would be the first of many times that the executive/artist ended up on a platinum LP. By the late ’90s, Puff’s relationship with Tribe may have sounded strange to fans watching the diverging sounds of Native Tongues and Bad Boy. In an artwork montage that included Beastie Boys, Too Short, Black Moon, Ice-T, De La Soul, Large Professor, Grandmaster Flash, Busta Rhymes, and others, there was Puff’. 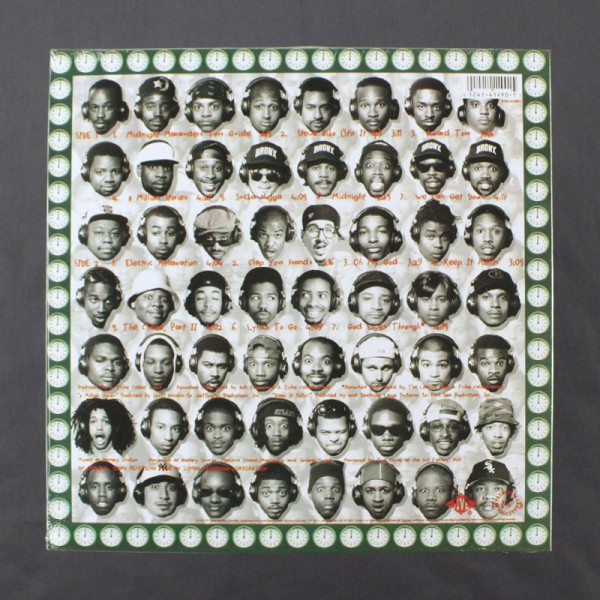 Speaking with Funkmaster Flex to promote his Can’t Stop Won’t Stop: A Bad Boy Story documentary, Puffy addresses a lot of things not found in the typical Combs interview. His Tribe ties are one of them.

A Tribe Called Quest's second album, The Low End Theory, was released on September 24, 1991, with 'Check the Rhime' as the lead single; the song largely established the lyrical interplay between Q-Tip and Phife Dawg. Until then, most of the group's songs had only featured vocals by Q-Tip, but Q-Tip encouraged Phife Dawg to increase his participation despite his recent diabetes diagnosis.

At 1:13:00, Flex asks this year’s highest paid entertainer (per Forbes) if he was an attendee at 1980s Manhattan clubs like Latin Quarter and Union Square. “I would go and meet [DJ] Red Alert at Union Square. Like, I was trying to carry Red Alert’s crates. [The same with] Chuck Chillout. Whatever I could do to get in the game. I was there from the beginning! I don’t know…if the [Brooklyn street gang] Decepticons would’ve got a record and they would’ve told me to go steal some Polo off of somebody, I may have did that! I was down for whatever to get in the game. If you look…remember that [A] Tribe Called Quest [Midnight Marauders] album cover with all the faces on there? I’m on there! I didn’t even have a record. I didn’t even have a job!…It didn’t make no sense; we’re not from the same neighborhood. It was just that I was always in the right place. That day they was havin’ a photoshoot for the album, somehow I was there. [Laughs]” “That definitely was Chris Lighty. Chris knew those moves to make. I met Chris when there was a brawl at M.K.’s. [at a Queen Latifah party]. That was the first time me and [Chris Lighty] met; we was fighting [together] shoulder-to-shoulder.”

At 34:00, Flex presses Puff about putting Biggie’s verse first on Craig Mack’s “Flava In Ya Ear (Remix).” Claiming that changed the trends of remixing, Flex asks Puff if that caused problems with the veteran Long Island, New York MC. Puff simply says, “To be honest, I’m not sure. ‘Cause at that time, Bad Boy was more of a dictatorship than a democracy. I’m just bein’ honest [laughing], you know what I’m sayin’?” Flex runs through the remix guests. “That’s when I managed LL [Cool J] for two weeks. I did—I managed LL for like two weeks. I did Phenomenon.” Puff Daddy is credited as that 1997 platinum LP’s executive producer. Atheros ethernet driver windows 10. “I did like that whole album, the whole nine. And he went Queens on me, and disappeared. He just disappeared, like, ‘I don’t want you to manage me no more. I don’t agree. I just want to do [something else].” Flex admits that he upset Uncle L by mentioning his Bad Boy affiliation in the mid-’90s. Puff continues, “Yo, he used to pick me up at my house. The doorbell would ring. I’d have to peak out and [look], even though it was me. I’d like, ‘Yo, LL is driving me around in the Rolls [Royce]. I’m buggin’.’…just the time of us driving around the city, just the jewels that he dropped. Me and him stayed close. He got a star at Hollywood [Boulevard] a year ago, and I presented him the star. He asked me to present it for him.”

Notably, LL was managed by the aforementioned Chris Lighty before and after his stint with Diddy.

Elsewhere in the hour-plus interview, Puffy reveals that he first met former girlfriend Jennifer Lopez when both were in high school. He credits onetime rival Death Row Records with outdoing Bad Boy’s plaques. He also claims that those holding the copyrights to 1975 Bill Cosby and Sidney Poitier film Let’s Do It Again prevented The Notorious B.I.G. from using the name “Biggie Smalls” as his stage name, not Uptown Records. He thanks JAY-Z for appearing in his Apple-backed doc’, despite a Tidal rivalry.