Pocket Tanks has been one of my favorite childhood games & even today I adore it.

Today I'd like to review the same.
THE GAME
The game is a terrific combo of fine graphics and gameplay. Really, the concept is one of the best: serene & precise and to a good extent unique too. The gameplay has its own style which as I said, is unique to this game. I haven't probably seen any other game using the similar fashion.
As the name suggests, Pocket tanks involves the use of small tanks, who fire different variety of weapons on each other. Each weapon has its own specialty & gains you different points or abilities when fired at the right Angle with the right Power and precision.
Talking about a few details now. You are first offered various choices like '1 Player', '2 Players', 'LAN Game' or 'Target Practice'. Choosing the usual '1 Player' should yield the option to select the Player Name and required Tank color. (You would be thinking why I'm talking about the trivia, but don't worry, the important stuff comes up now!).
Next is the option to choose the weapons that you want. Choices can be made randomly or if you become advanced player, it'll be done in a typical gully game style, one turn yours, next one the other player's. Next up will be the gameplay screen.
Of-course this is the most prominent screen. Here you see a terrain (land), 2 Tanks (1 yours, other one CPU's/Other Player's) & a few controls. 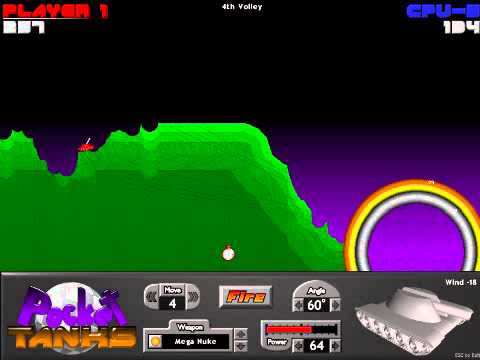 What you need to do is adjust the power and angle in such an equilibrium that the shot you're going to fire hits the Tank, also the Shot/Weapon selection is important. The 'Move' option can also be used to move ahead or back in case you need to. 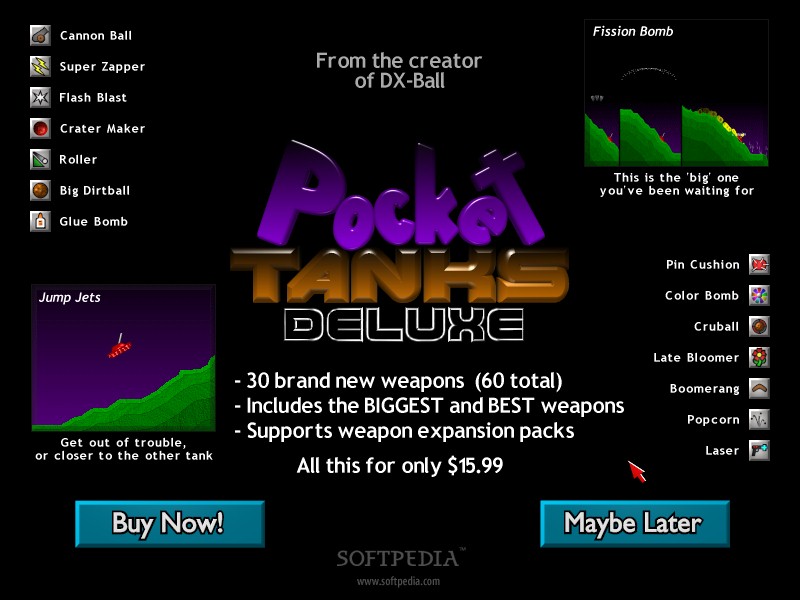 So now, if you ask me I just love this game. I've played it from childhood and really liked it. The best thing about it is that it doesn't let one feel bored, bringing variety of weapons and n every game they're different. Also it keeps you ever-involved & concentrated, since you require good precision to play it well. My favorite weapons are Napalm, Sniper shot & Hailstorm. 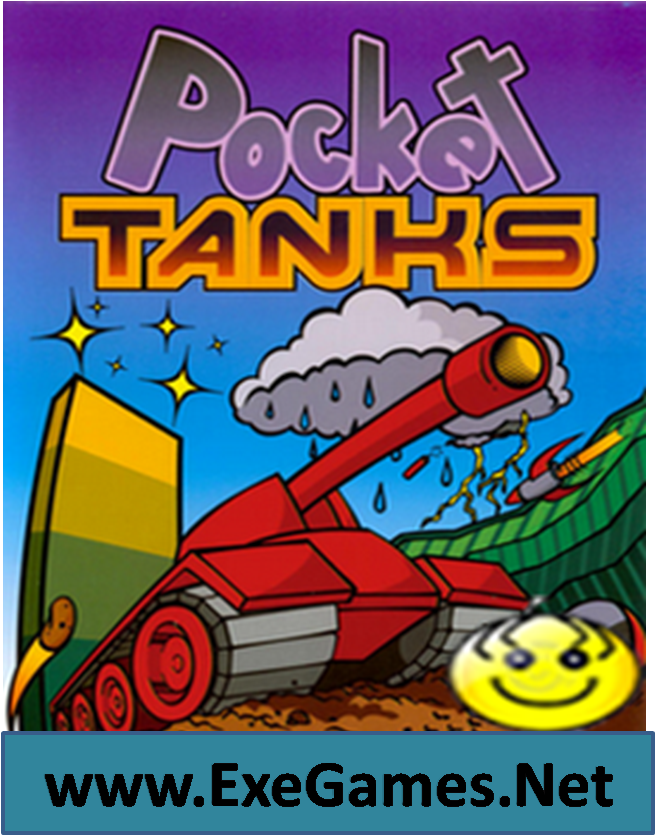 If you want me to look on the down-side, I think non-availability of an online server to play this ecstatic game is a point. I mean I really wish to play it with some random players sometimes. But you know, to make a game that widespread, a lot of resources are required.
So overall a nice game, I'll reckon to try it at-least once.
DOWNLOAD
The game is multifarious considering the fact that it is available in a variety of platforms including Windows, Android, Mac, iPhone, Amazon & Windows 8.1 Store.
I use the typical Windows version myself. In that it comes in 2 version: Pocket Tanks & Pocket Tanks Deluxe. Simple 'Pocket Tanks' gives you the basic Free version, with the basic set of weapons. 'Pocket Tanks Deluxe' is the Paid version, giving you a lot more weapons & terrains.
So try the free version, if you like the game, go for the 'Pocket Tanks Deluxe' if you need. 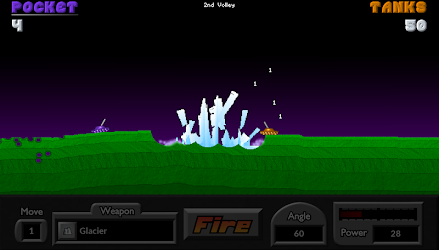 You can download Pocket Tanks Free version (links for any platform) in the following Official website link [Also browse for Pocket Tanks Deluxe]:
Visit Now
So I hope you liked the above review.
Comment with your reviews, questions or to contact me, I can also be contacted by the 'Contact Me' option on the website.

What’s new in this set of Pocket Tanks updates?

In this new set of Pocket Tanks updates: Weapons are arranged by an expansion pack, and then alphabetically.
Hopefully, this allows you to find a particular armament relatively quickly.

Fires ten small Crafts, five to one side of your focus, five to the extra side. When they land, the ones that stayed shot short of the target will move forward; the ones round earlier the mark will move back. Each one organizes 10 damage and has a tremendously tiny blast. (That’s a total of 100 damage if all of them hit, in case you can’t fix arithmetic.) Complete, the uses for this armament are pretty broad, as the cruisers go quite far; but, it is vulnerable by the tendency of the blast of one craft to lift the tank up and allow others to truly pass under the tank. The disruptive only worsens when the cruisers not only pass up the opponent tank but go all the means back to yours. All in all, but, this is a pretty good weapon from the latest Pocket Tanks updates!

Ardours one projectile; once the bullet gets close to the enemy or hits the pulverized, it bursts into 75 bees. The bees bound on the territory a bit, and act a lot like Heat hunters otherwise. Each bee does…one point of damage with an essentially non-existent blast radius. So we’re not exactly watching at an instant game-winner now (even if near are a lot of bees, only about half of them will actually hit).

Overall, though, it is a nice little weapon, since you don’t need to be very accurate to score ideas with it.

Makes a wall, just like the Magic Wall, except this one is quite a bit quicker and also a little thinner. But, this wall is made totally of bouncy dirt. It’s mainly apologetic (just plop it downcast right in front of you and watch the other players miss totally as they try to routine the wind to bend around it), but, you can also use it as an attacking aid (shoot it overdue your opponent to bound shots into their tank). There are sufficient other practices for it, too. Red dead redemption 1 pc emulator.

Essentially, it is an apologetic weapon. You would perhaps do better with an Armour or Shelter, but if neither of those exists, this is your next choice.

This is a fairly simple firearm. It fires ten shots in a small spread, each bullet with a tiny blast area that does 5 damage. It’s a nice firearm if you have a Funnel or if your opponent is very close, in which event you should be able to move all the shots to hit; otherwise, imagine to get only around 25 points with a flawless shot.