I need software for HP EX475 MediaSmart Server. Anyone has an idea where I can get it. I installed 'HP Support Assistant' but this tool doesn't detect my device in the network. I added it manually to my devices. No way to find a copy of the original software in the web to use the device. Perhaps HP will be pitching the higher spec EX495 as a server for users who want to take advantage of the extra power for media conversion and remote streaming, with the lower spec EX490 as a standard home server for people without the media conversion requirements. Time will tell I guess.

As of October 2008, the HP MediaSmart Server is sold in two models, EX470 (RRP US$599) and EX475 (RRP US$749). They feature a 1.8 GHzAMDSempron 3400+ processor, one Gigabit Ethernet port, four internal SATA drive bays, four USB 2.0 ports and one eSATA port.[1] The two models are identical with the exception of the amount of included storage: the EX470 has one 500 GB hard drive preinstalled, while the EX475 has two 500 GB hard drives preinstalled.

On December 29, 2008, HP announced two more models, the EX485 and the EX487, available for pre-orders starting on January 8, 2009. The newer models include support for Apple's Time Machine backup software. They also use a 2.0 GHz IntelCeleron processor, replacing the AMD Sempron from the old models. Other features include a revamped user interface and larger preinstalled hard drives (one 750 GB drive for the EX485; two 750 GB drives in the EX487).[5]

On April 30, 2009, HP announced the MediaSmart Server LX195 which was intended to be a low-cost entry into the Home Server market.[6] The new model featured a single internal 640 GB drive, a 1.6 GHz IntelAtom 230 processor, 1 GB of DDR2 memory, Gigabit Ethernet, and four USB ports for storage expansion. The software features included with the LX195 are the same as the initial launch features of the EX485/EX487 server

This document describes the behavior of the Server Recovery and Factory Reset process used by the HP MediaSmart Server EX490, EX495, and X510 DataVault servers. This process is new for these server models, instead of using an on-board USB flash drive for booting the server, it is instead booted from an image that is loaded over the network from a Client PC. This has caused significant concern[1] and problems[2] amongst owners of these models of the server.

The MediaSmart Server is a headless device with no keyboard or display available to reload the operating system. Instead, a special DVD is included that enables the user to rebuild the server. How to use wiisx.

Both the Server Recovery and Factory Reset process is performed in the same manner, with the only difference being the operation chosen by the user when they perform from the client PC. Both of these operations will hereafter be referred to as Server Recovery to simplify the documentation of the process.

The EX470/EX475/EX485/EX487 all contained a 256MB onboard USB flash memory that stored a special Windows PE boot image. This image allowed the server to boot into Server Recovery mode, where it was able to transfer the OS image from a client PC and apply it to the system drive of the server. See How_do_I_perform_a_Server_Recovery? and How_do_I_perform_a_Factory_Reset? for more details on this process.

With the EX490, EX495 and X510 DataVault HP has removed this onboard flash and instead uses a PXE boot process to boot the server over the network and requires the server and Client PC to be directly cabled together. This has some advantages in that it removes the possibility of DNS issues, but also introduces new possible failure points, specifically with the need to acquire an IP Address via DHCP from the Client PC that is performing the Server Recovery, and with the transfer and loading of the boot files.

HP has documented the process in the User Guide[3] on pages 213 - 217 from the end user perspective. Unfortunately the details and troubleshooting tips often aren't adequate to resolve issues encountered during the Recovery process. Please review the instructions from HP for an understanding of how this process works.

The following is an example of a Server Recovery, with the benefit of a display connected to the server and some troubleshooting tips and images that will hopefully help you work through any issues you may encounter. The images will follow the process described above. I performed the recovery on my netbook running Windows XP SP3, over a 100mbit connection wired into a gigabit switch, with the server being the only other device on the switch. This is not required, you can directly wire the server and client together, this was just more convenient for my setup. The server contained a single hard drive with all partitions removed, there was no data on this drive and the recovery process had no issues with the blank drive. I performed the Factory Reset process, but the steps are the same for a Server Recovery. 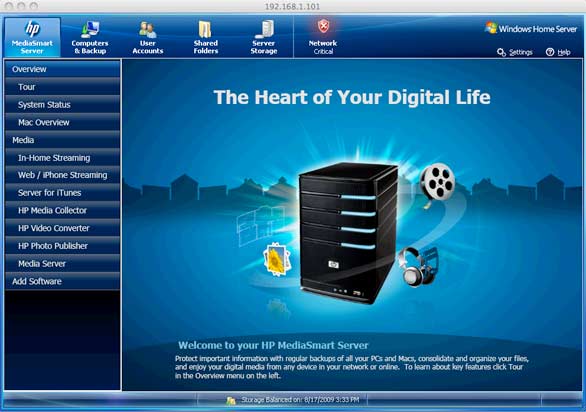